Vernag is a beautiful town in Anantnag district in the state of Jammu & Kashmir of India. It is one of the most visited towns in Jammu. Many tourists visit here daily. Vernag is 26 kilometers from Anantnag and 86 kilometers from Srinagar. When you travel from Jammu to Srinagar through road, it is the first major tourist attraction in the Kashmir Valley. Vernag Spring is the major attraction in the area and the place is named due to this spring. An
octagon shaped stone basin surrounds the spring.  This was built in the year1620 by the Mughal ruler Jahangir. Some of the major specialites of the Vernag Spring are - Vernag Spring has never in its life had dried up neither it had overflowed. An other important speciality of the Vernag Spring is that it is the major source of the Jhelum River. Vernag Spring was not originally this beautiful and it dosen't had any shape, Emperor Jahangir was the man behind making this spring this good and beautiful. A beautiful Mughal Garden was later on added with the spring. the man behind the creation of the garden was Shah Jahan, the son of Jahangir.It is said by the locals that the spring is almost 50 feet feet in the center, 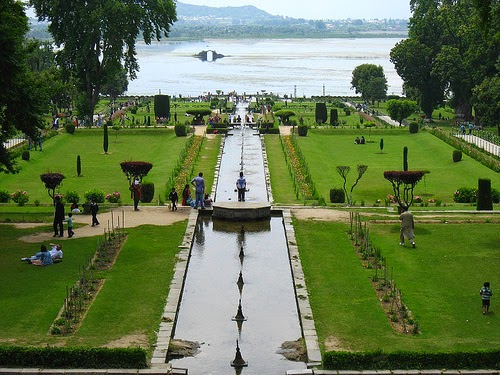 also the water drains into the garden which is near the spring.
The place is important for Hindus as the Garden has a temple with a number of idols of gods and there is shivling (statue of Lord Shiva) near the Vernag Spring. The spring has a good population of trout fish but it is believed that it has never been consumed due to religious reasons. This resulted in making the spring into the fish reserve. There is a long straight channel made from the spring through the garden to the river, this feeds the river Jhelum. There are two stone tablets in the Spring which praises about the spring and tells about the date of construction of the tank etc. The stone tablets are in Persian language. This has an approximate area of 13 acres. 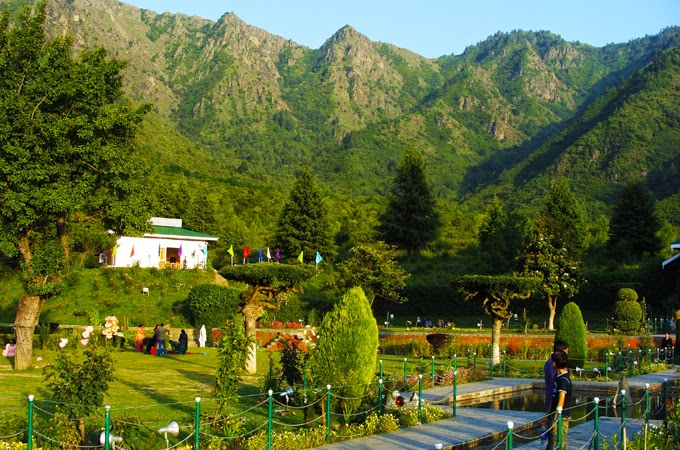 Vernag Spring and Mughal Garden located in Vernag is a beautiful town, where the climate is warm and shiny. The area is sufficient with rainfall. The average temperature of the area is nearly 13 degree celsius. The average elevation of Vernag is about 1,851 metres. Now the  Vernag Spring and Mughal Garden is owned and operated by the Jammu and Kashmir Tourism Department.

Get Here
Nearest Airport: 82 kilometers from Vernag is the nearest airport, the i.e, Srinagar International Airport, which has a good number of flights from Jammu and Delhi.
Nearest Railway Station: 119 kilometers from vernag is the nearest railway station Qazigund railway station.
Roadways: National Highway 1A provides quick and easy routes between Jammu and Srinagar. Srinagar is 82 kilometers awqay from Vernag. [See Map] 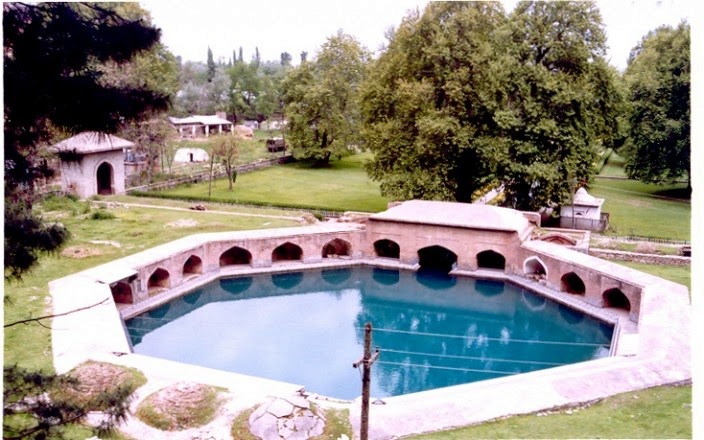 Stay Here
There are a verity of hotels and accommodations available in and near Vernag.  Hotels near Vernag.